There are two kinds of web service interaction patterns that are there- Synchronous and Asynchronous. 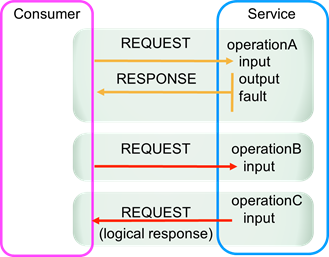 Synchronous operations expect to process an input and return an output or a fault response to the invoker within the same connection. Although this type of interaction is easy to implement, it has certain limitations.

Asynchronous operations contain only input elements. No specific response is expected by the invoker except transport protocol confirmation that the request has been delivered to the target service. The service invoker is therefore unaware of the results of the request processing by the service. However, it is possible that the invoker can also present a callback capability. This would allow another asynchronous call to be made in a reverse direction. Such a callback may be used to indicate the result of the processing of the initial call that the service has received. This approach is much more flexible than synchronous interactions, because it is not time constrained.

Any REST or SOAP service may receive a request and generate a response or fault, which is the essence of synchronous interaction pattern. However, unlike SOAP, REST is not capable of true asynchronous communications, because REST is essentially inseparable from the HTTP transport, which is inherently synchronous.